Claude Langlois was born on August 2, 1949 in Saint-Jean-sur-Richelieu. In 2021, he will be celebrating 50 years in the Québec film industry. As the eldest of five children and the only boy, Claude learned early on how to live surrounded by women. He got his start in the private sector as an assistant picture editor. Since there was no film school in Canada in those days, he learned his trade “on the fly”. Then he found out that a junior editor position had opened up at the National Film Board. He met producer Lucien Marleau, who took Claude under his wing. When the Université de Montréal launched its film program, Claude planned to enroll, but his mentor thought otherwise: “You don’t need to go. I’m the instructor and I can tell you that the best school is right here at the NFB.”

His career at the NFB

Claude also did a lot of post-synchronization work and impressed with his talent, soon making it his specialty. He worked on both image and sound, shifting back and forth as projects progressed. In 1979, he did the sound editing for his first full-length feature–Mourir à tue-tête by Anne-Claire Poirier. It is at this point that his professional destiny took shape. From that point on, he was “the sound guy”. The experience proved to be a significant one for him. He worked closely with the director and fell in love with sound design.

He stayed on at the NFB, ever a freelancer, plying his craft for both fiction films and documentaries. He saw that as one of his favourite perks of the job, because “he changed worlds” frequently. When people asked him if he preferred documentaries over fiction films, he was often stumped, saying that every project has its own special challenges.

The adventure of Contes pour tous

A key part of his professional journey was the Contes pour tous series, produced by Rock Demers. He did the sound design for twelve of these widely beloved films, including La Guerre des tuques, Bach et Bottines, La Grenouille et la baleine and La Championne. Claude is proud to have been part of such a “great adventure”. The first film of the series—La Guerre des tuques, directed by André Melançon—became a cult favourite across age groups. He forged a close collaborative relationship with Melançon. Claude sensed from the very start of the project that he was taking part in something very important. This was the first film produced by Rock Demers at a time when Québec-made films were having trouble reaching their audience. The project is still his proudest achievement to this day. The film presented sizeable challenges in terms of sound, such as creating sound effects in a studio by having snow delivered and spread out on the floor. They even “created a ski slope to recreate the sound atmosphere”. 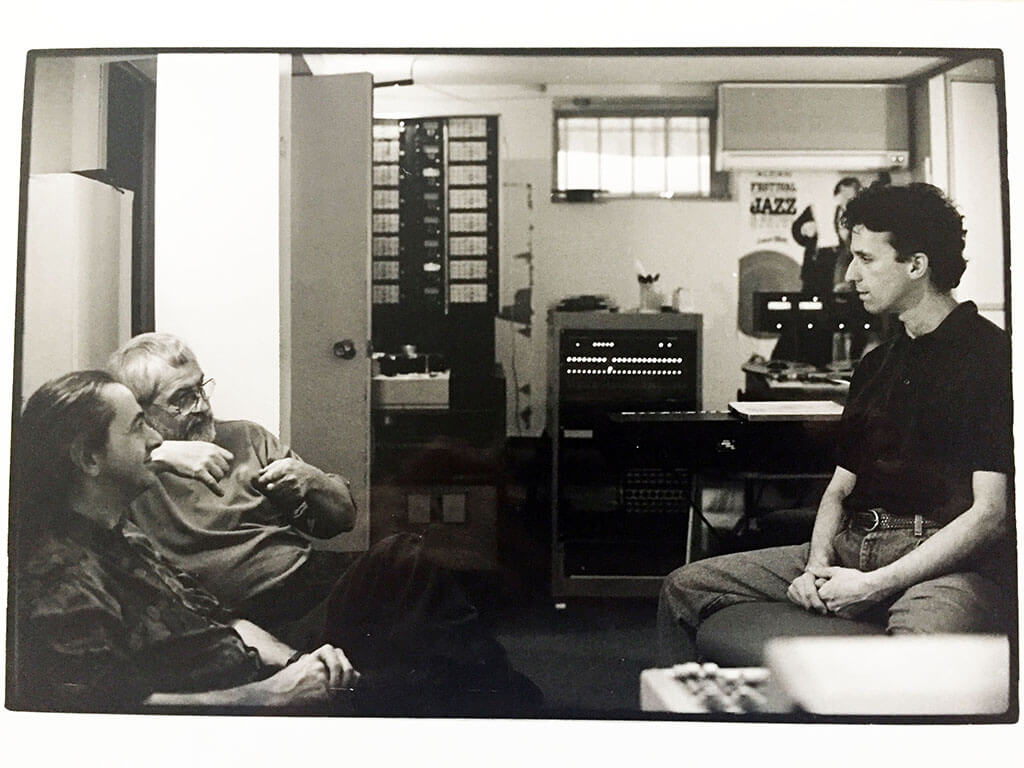 © photo Geoffroy Gosselin
From left to right Claude Langlois, Bernard Gosselin director at the NFB and right Robert Marcel Lepage musician and composer. Working session on “The Glass Arch”, a documentary on the construction of the Biodôme in 1994. At the “Picolo” studio. 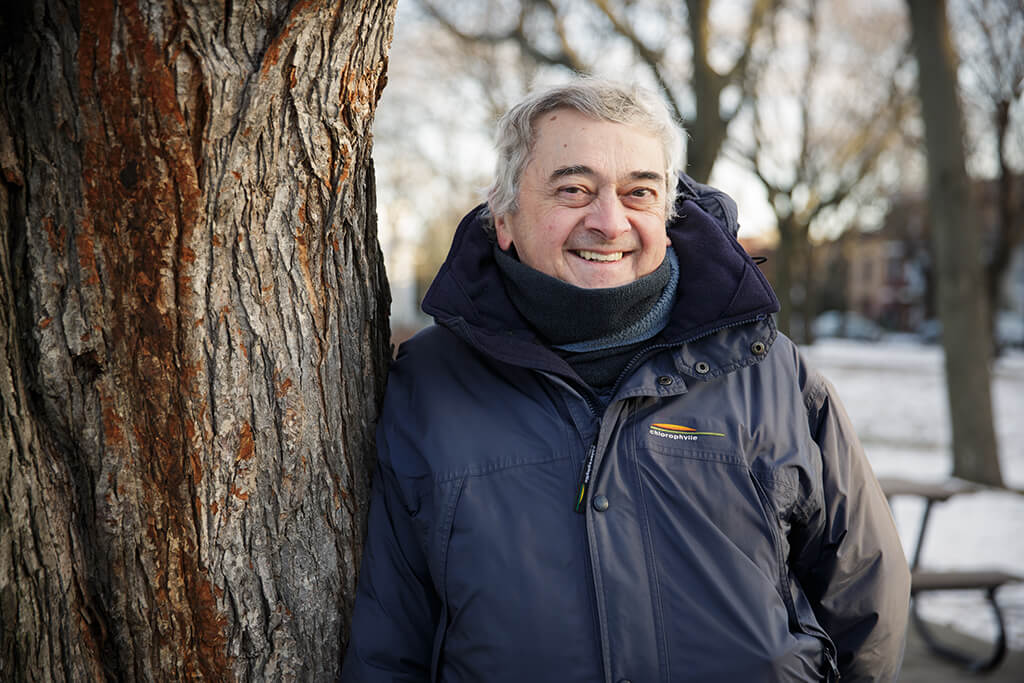 Claude met Mélanie Gauthier at the NFB in the 90s, when she was in charge of switching the editing rooms to digital technology. They put their heads together to adapt work methods to the transition from film to digital. They reviewed all the phases—digitizing, editing, accessing the NFB sound library on the server and mixing in the theatre, because the mixing room is actually a movie theatre. Mélanie and Claude worked well together. She learned a great deal, and he agreed to let her watch him work. Afterwards, even though their respective projects took them elsewhere, these sound artists stayed in touch and were always happy to hear from each other. Their paths crossed again in 2014, when Claude contacted Mélanie to work with him on a Patricio Henriquez film, Uyghurs: Prisoners of the Absurd, which went on to win the Jutra (Iris) award for best documentary film.

Claude still remembers July 7, 2014, as if it were yesterday. That was the day that the great library adventure got started. Mélanie was about to delete the sound ambiences she had collected, but Claude, who said he had “always wanted to” create a sound archive, got involved in her crazy project. So Mélanie started the work to digitize and identify her collected sounds, which would become the sound library. Claude Langlois was her first, and most important, collaborator. Mélanie describes him as “a true artist, who’s really gifted at identifying sound ambiences.” Claude travels with the sounds collected by Mélanie and her collaborators. In addition to cleaning, identifying and altering tracks, he does extensive research to understand exactly where the ambience comes from. He’s the one who listens for the whispered introduction as the audio operator enters a temple in an unknown city. He admits to using Google Earth to round out his research. So here he is, a great traveler, despite confinement.

We’ll be celebrating an immense career next year. The career of a man who bore witness, a poet of sounds, who has always listened to Québec cinema and heard its heart beating. We wish you continued good health, Claude Langlois, so we can keep hearing your anecdotes, where your laughter is the most beautiful of sounds.

Claude Langlois particularly admires the work of a number of women: his former assistant Myriam Poirier, audio operator Diane Carrière, who recorded the sounds he’s currently working on for the library, and Catherine Van Der Donckt. These women have produced work of outstanding quality.

“You have to listen in order to hear better,” claims Claude Langlois, who also taught at the Institut national de l’image et du son. He took his students to the Montréal Botanical Garden and asked them to walk around blindfolded to sharpen their hearing. When other senses are impaired, hearing improves and becomes sharper. Excellent hearing is of course necessary for effective sound work.