When he was about twelve years old, Serge Beauchemin was given a tape recorder. He started carrying it with him everywhere he went. Along with his twin brother Claude, who would also become a recordist, he started his journey into the world of sound, which came to him as if by destiny. Originally from Montreal, Serge was planning to become a teacher. He spent the summer of his final year of studies cleaning labs at the NFB. That’s when he met Pierre Patry, who offered him his first gig as boom operator for La corde au cou (1965). Serge was 23 years old. A teaching career was no longer on the table.

The golden years of the NFB

At the NFB, says Serge, everyone socialized, chatted and discussed how their projects were coming along. Alain Dostie, then assistant camera, became a good friend. One day Alain told Serge that renowned sound recordist Marcel Carrière was making the shift to directing. Serge seized the opportunity and Marcel Carrière became his mentor. Nagra III in hand, he went on to record sound for great documentaries that defined the cinéma vérité movement of the 1960s: Le règne du jour (The Times that Are – Pierre Perrault), Les voitures d’eau (The River Schooners – Pierre Perrault) and César et son canot d’écorce (César’s Bark Canoe – Bernard Gosselin). Serge forged a close bond with Bernard Gosselin, cameraman then cinematographer, who gave him advice that he kept in mind throughout his career: “A good cameraman must be able to listen and a good sound recordist must be able to see.”

Serge also worked on fiction films and gained experience on some 60 features, in addition to numerous television films and series. A high point in his career was the filming of Kamouraska, directed by Claude Jutra, based on the novel by Anne Hébert. The film adaptation of this important work of Quebec literature was an important step in his career as a sound recordist.

A sound recordist’s work involves considerable restraint and subtlety. It’s important to be present, attentive and discreet, while paying close attention to limitations imposed by the direction and the framework.

While he was working on the sound for Denys Arcand’s documentary On est au coton (Cotton Mill, Treadmill), Serge faced a major challenge. The technicians were blocked from doing their job so e)they had to pretend they were no longer recording anything. “It’s all about the approach. You have to be there when the opportunity comes along.” Pierre Perrault said to his team, “You’re the very first people who will see this film,” and when he saw that they were moved, touched or interested, he knew he had material for a story. Filming a documentary with Perrault was not a walk in the park! At that time, everything was still done on magnetic tape and 16mm film. The cameraman worked with 10 minutes of film at a time and the soundman had a 15-minute reel. Each time there was a dilemma: continue recording or to take advantage of the pause in filming to change the reel? It was crucial to not miss a thing. The way of thinking about documentary filming evolved a lot during those years. Since shooting is almost non-stop, editing becomes very important, including hours and hours of viewing, often with the whole crew.

Serge ran into numerous obstacles and challenges while working on fiction films as well. He wistfully recalls the camera wrapped in thick brown blankets during the shooting of André Melançon’s La guerre des tuques (The Dog Who Stopped the War). In addition to the cold weather, the team working on this film had to deal with impulsive child actors.

With my assistant Marc Furtado 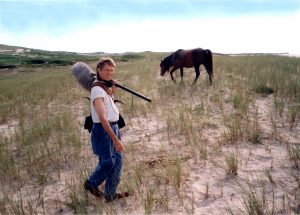 The role of sound

When asked if the sound crew’s place on a set is still crucial, Serge Beauchemin affirms that it is. Sound is particularly important in documentary films. The words being spoken need to be audible. There are no rehearsals – it’s now or never, unlike with fiction films where reshooting is always an option. It is also necessary to know how to negotiate and plan time to record specific ambiances for each sequence, without other background noises or sound interference. This is essential for sound editing.

Serge and Mélanie crossed paths at the NFB in 1995, when she was assisting Hélène Girard, picture editor. Hélène would get starry-eyed when she talked about her boyfriend, a documentary sound recordist. While digitizing images and sounds, Melanie consulted the sound reports, which told her a lot and helped her identify each clip. That’s how she learned that making soundscapes on location was an art. “It was the first time I understood that it was a key position in the production of a film. That it went far beyond the technical aspect. And that it opened the way to meeting people, seeing unusual places and traveling the world.” Although she was headed for an image-focused career, Mélanie says that meeting Serge greatly contributed to her awareness of the audio aspect of film, as well as giving her the confidence to embark on the adventure of sound. Later on, when he found out about her sound library project, Serge expressed his admiration for the work she had done and gave her nearly one thousand sound ambiences. Mélanie is very grateful to him. “All these rich and unique recordings are a major asset for the library. Thanks to vocal identifications and personal comments at the beginning and end of each recording, Claude Langlois and I were able to identify each file while respecting the emotion of the time and place where Serge was. There’s a certain poetry to the art of recording sound ambiences. It’s quite beautiful.”

Even during retirement, Serge Beauchemin can’t stay away from the world of cinema. With his spouse Hélène Girard and his Geoffroy, first cameraman, Serge is still involved in Quebec cinematography. He and François Gill created a page on Facebook dedicated to sharing photos of film shoots, highlighting the work of technicians and artisans of the cinema. And of course, he still goes to the movies to watch – and most of all, listen to – our work.

A word by Serge